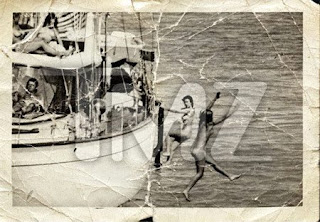 “We believe the photo was taken in the mid-1950s. It shows two naked women jumping off the boat and two more naked women sunning on the top deck. Just below the top deck — a man appearing to be John F. Kennedy is lying on a deck, sunning himself.

TMZ had multiple experts examine the photo — all say there is no evidence the picture was Photoshopped. The original print — which is creased — was scanned and examined for evidence of inconsistent lighting, photo composition and other forms of manipulation. The experts all concluded the photo appears authentic.”